My sport is orienteering and I am passionate about it. It is one of the sports that have decreased funding because it is not an Olympic sport and, I suspect, not a team ball game. Orienteering is largely an individual sport open to everyone whatever state of fitness they are in and however competitive they wish to be.

This is what the governing body of the sport British Orienteering says about it:

Orienteering is a challenging outdoor adventure sport that exercises both the mind and the body. The aim is to navigate in sequence between control points marked on a unique orienteering map and decide the best route to complete the course in the quickest time. It does not matter how young, old or fit you are, as you can run, walk or jog the course and progress at your own pace. Orienteering can take place anywhere from remote forest and countryside to urban parks and school playgrounds.  It’s a great sport for runners, joggers and walkers who want to improve their navigation skills or for anyone who loves the outdoors. Orienteering – The adventure sport for all!

The sport instills personal reliance, fitness, fairness, thought (It is called the ‘thought sport’) and in countries such as Norway, Sweden and Finland features on the curriculum in every school.

SSPs was “neither affordable nor likely to be the best way to help schools achieve their potential in improving competitive sport”. Schools, he said, would from now on be able to decide their own sports policies, free from a “centralised government blueprint”.

So the specific money has gone … make up your own mind how you are going to move forward schools are told. PE in schools is not the same as recreational sport.

Mr Gove, this morning on BBC Breakfast, seemed only to refer to team games played with a ball and denigrated, rather callously, individual skill and dedication by using the example of ‘circus skills’ as something less worthy. Has he not heard of ‘Cirque Du Soleil’

So I checked the Olympic programme for 2012 and the sports ‘we’ are supporting:

I don’t see any mention of these really important team ball games here – except hockey !! – and we don’t do the football !

The majority of these sports are individual sports, team backed, but essentially on the day are down to individuals performing on their own at the top of their capacity.

Just as an aside … the video on BBC News this morning showing some boys playing football in a sports hall interested me. Firstly because it was used as a vehicle to suggest that ex-service personnel could become a wonderful resource as teachers (I assume that they will all have to have at least a 2.2 to qualify) and secondly because it appeared to me that the boys were playing in their ordinary school clothes! 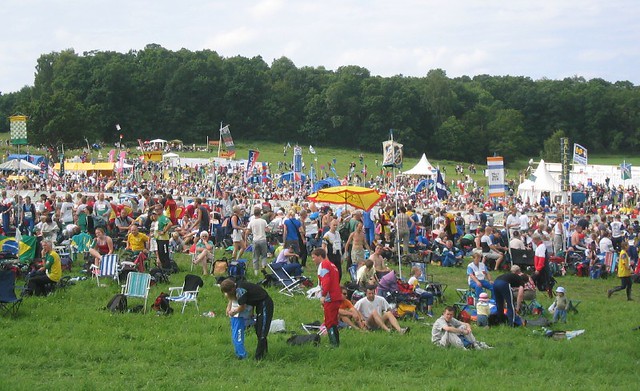 Released under an Attribution-NonCommercial-ShareAlike License

And in his statement to the House today he only mentioned ‘TEAM’ sports … !!!